Because three printers were not enough

While we were busy with other things, the 3D printing hasn't stopped, just slowed down a bit. We even bought a new printer to add to our selection. 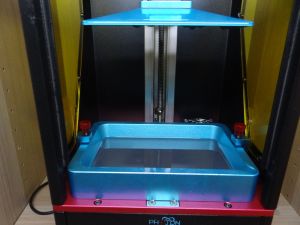 This printer is not the fused filamentThis is the plastic which is used as a source for the printRead more fabrication type printer we had before. We like those printers, but the precision is limited, because of during the cooldown the item shrinks a little. It's not bad, but noticeable: about 3%. We wanted something more precise and with even more detail.

This printer is a different class: it's called stereolithography or SLA for short. It uses UV light to harden the special photosensitive resin and make the body of the and product. You can read more about it on WikiPedia. It is not only more precise, but requires a different approach to create the models.

Of course the first thing we tried to print with it was a Lego brick. And this was the first time the printer was precise enough to spot a few errors in our Lego model generator. And yes, after a few tries we made a Lego brick which was actually compatible with Lego!