You saw it on our cover, because we printed it months ago, just never write about it...

We read about the sneakoscope in the Harry Potter book series, but it never appeared on the screen. We read about it on the Harry Potter Wiki too, and finally we saw how it looks like. We created the model based on the books and the wiki. The general idea of the sneakoscope is that the ball inside can move around. In the book it points at the danger, of course ours only can move, but it does it nicely. 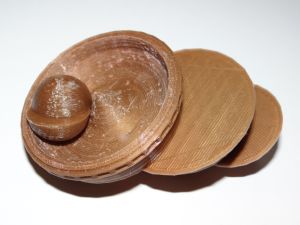 It's a rather complicated model. The body of the sneakoscope is printed in three pieces, while the ball is another two. You can see the order it should be glued together on this picture.

We used the pictures on the wiki as a guide for painting. We used acrylic paint for this as was the usual for us at that time. The transparent half sphere is from a Christmas ornament. The Christmas ornament has two half so we have a spare one which we plan to use for another custom color version. The "sneakoscope" text is not painted of course. It is printed on an adhesive label.