Lizard and other news

Recent news and the lizard 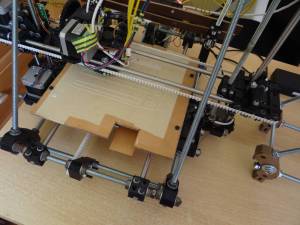 Our last news was about the maintenance, which solved several problems of our printer, but not everything. First of all we have to tell that the new barrel works perfectly after a few small adjustment of the settings, so we are very much thankful to our friend who made it to us.

When we had been confident the new barrel did a great job, we wanted to print with the white filamentThis is the plastic which is used as a source for the printRead more again, because it would be slightly easier to paint the white than the gold. After several tries and a few quick fixes we gave up. We still can't print in white. We think there is a problem with the filament, because we experience some really weird problems like small fibers stuck the hotendThis is where the plastic actually melted. It is part of the extruder which contains the pusher and the barrel as well. and so on.

After we switched back to the gold filamentThis is the plastic which is used as a source for the printRead more the things started to work again, but small problems still occured time to time. One recurring problem is that the printer tends to disconnect from the computer during the printing which of course means the print will fail, because it is not possible to continue a printing. It is probable some electric connection became loose while we were working on the other problems. One other problem is that the plate of the printer seems to be not in level, but we want to change it anyway soon, so it's not that big a problem.

And at the and of the problems, here are the good news. It seems the new barrel solved the problem which was the cause why we couldn't print with the full speed of the printer. Now, our printing speed is back to normal - but the truth is that our priner is very slow even after this improvement. Slow, but the quality is good, and that's the most important thing for us. 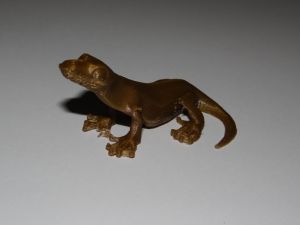 Ohhh, and we found this lizard on Thingiverse recently. It looked so good we needed to print it - so here it is. We wants to write the print itself went smoothly but the truth is the result on the picture is the second try - the first try was a failure because of a slight shift on the X axis - and even that one was not perfect, because the cooling was not enough.