A bit of a problem again

The pusher needs to be replaced 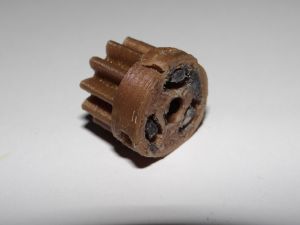 Recently we saw several times that the pusher stuck. It turned out the problem was not the power of the motors this time. The problem was something even simpler: the small gear on the pusher-motor broke sometime in the last year or so. And now it reached the point when the gear simply slipped on the axis of the motor.

We were planning to replace the whole pusher in the near future anyway, so this was a good time to print a very new one. We picked a different version, which has a more open design. We hope this means it will be easier to keep it clean. 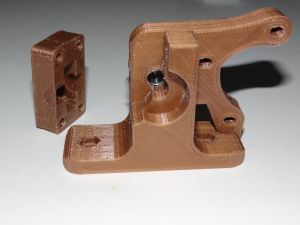 We have printed everything for the new pusher - including the two gears - and are planning to assemble it before we put it on the printer, just to be sure everything works before we disassemble our printer. It was clear at first glance the two gears are a bit different in size then the previous ones, which means we couldn't change the gears till we don't change the pusher. And we couldn't assemble the pusher because several things still have been missing. First of all we don't have any bolt which is the right size to fit the motor on the pusher. The other thing that is missing is the bolt which holds the idler which pushes the filamentThis is the plastic which is used as a source for the printRead more to the hobbed-bolt. These bolts are special ones and not easy to buy, our first attempt was unsuccessful, so we have to visit a special shop, but we haven't had timer for that yet. 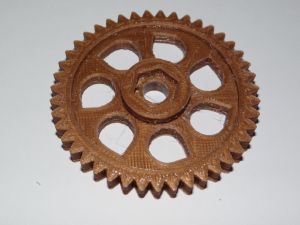 The conclusion of the previous long paragraph is that we still couldn't replace the old pusher, thus we couldn't put on the newly printed gear set. We had to put on an old spare one. We are sure it will survive that few days till we have everything to replace the whole pusher.