Progress in the last few week

Yet another set of issues with the printer 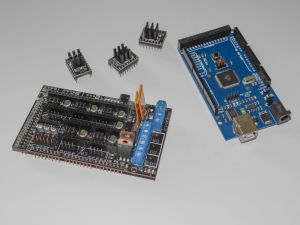 It has been more than two weeks since we reported that we fixed the main board issue. We were very happy and thought now we can print without any problem for a while. We were wrong as it could have predicted.

The first thing we started to print with the freshly fixed printer is some things to sell, because suddenly we sold everything we had before. And then, it happened: the result seemed uneven, the circles became ovals. At first glance we thought the problem is the loose belt of the Y axis, but after some investigation it turned out the problem was actually the belt of the X axis. It is a known issue with this type of Rep-Rap that the X belt has a very short live-span - a hundred hour or so - and we seem to be reached that point when this starts to cause visible problems. 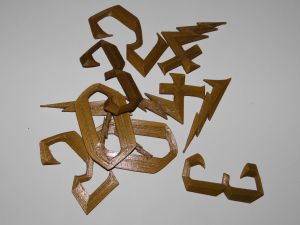 Of course we ordered a replacement belt immediately, but it needs weeks to arrive. So we started to look for something to print which is not that important to be very accurate. After some research we came up with an idea to create a set of Harry Potter style door numbers - very similar to our own - to make it possible to buy it through Ebay.

We are only half-way to finish the set - today we printed the number four, but we are not yet ready with the remaining five numbers. So it still needs time to finish the set, but it's okay, because the belt has not yet arrived.

And this is not the end of the story. We printed the first few numbers without any problems, but recently we experienced a few glitches with the Y axis. Somehow the motor failed to move the bed for a period of time thus the result has shifted a lot. At first we suspected some contact problems with the wires, but everything seemed fine. Then today we removed all of the motor drivers from the board and put it back to make sure everything is okay there. And this solved the problem! We are not sure what exactly the problem was, but it's working finally. Let's hope there won't be any problem tomorrow...

For those who are familiar with computers the motor driver may refer to a program, but in this case it is not a program, but a small device on the main board which handles one motor. We have four motors in our printer so we have four drivers on the board: one for each axis and one for the filamentThis is the plastic which is used as a source for the printRead more pusher.