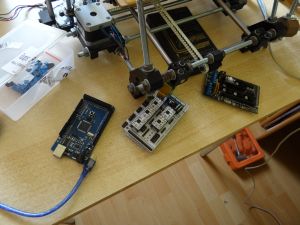 The whole story started with a small hiccup: the Y axis has stopped occasionally again. We saw this issue before and know the solution as well: contact spray for the driver and all cable for the Y axis.

The small problem started to become bigger when we forgot to switch off the power of the printer before we used the contact spray. We couldn't connect to the printer when the Y axis was installed to the printer. We had absolutely no idea what happened, so we started to replace the drivers, the cables and so on. Basically we tried to figure out what happened, what could be the reason of the strange behaviour. 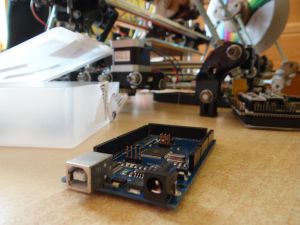 And that was the time when everything went terribly wrong. We accidentally installed the Y driver one step to the left. We wanted to test if we can connect to the printer if only the Y and Z driver was installed while the X wasn't, we didn't realize our mistake. And something started to smoke. Those few seconds which was needed to kill the power from the printer after we realized something is wrong caused a big cloud of smoke above the printer.

Of course nothing worked after the accident. We not just couldn't connect to the printer anymore, but the printer started to heat the hotendThis is where the plastic actually melted. It is part of the extruder which contains the pusher and the barrel as well. as soon as we connected to the power supply. We knew something has died. Fortunately we have already ordered the whole set of electronic parts for our second printer we planned, so we had replacement for everything. After several tries we reached the conclusion: the Arduino board was the victim. 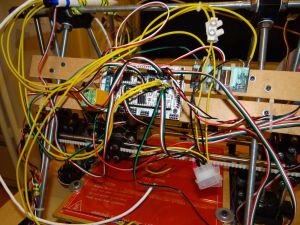 After some thinking we decided to replace the whole main board to the new one including the drivers, because the new board has SD card support, and we already bought the Sdramps to support printing without the PC connected. Unfortunately we don't have an appropriate micro SD card right now, so we have to wait till that arrives. Around Christmas that could take a while. 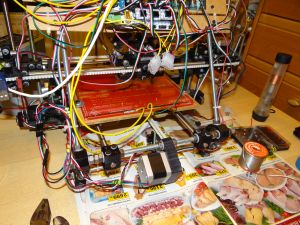 Uploading the firmware to the new board was quite easy, but after that we had some problems with one of the drivers. And it was the Y driver again. There must be a curse on the Y driver. Removing every driver and using plenty of contact spray solved this issue. And this time we very carefully checked if we'd switched off the power before we used the contact spray and of course we double checked if we installed all the drivers correctly.

After this short interlude we had yet another problem with connections. The new board has a mini USB connector instead of the old one's normal USB connector. So we had to use a new USB cable and because that cable is very short a USB extension cable, too. The first print stopped, because we lost the connection between the PC and the printer. We solved this problem with contact spray as well, but this is another reason to install the Sdramps as soon as we can.

The test print went smoothly without any other problem. It seems our printer is back in business and the only change we see (or hear) so far is the change the sound of the motors. It is much louder and harsher than before. Maybe the cause is the different settings of the new drivers. We will check it during the next few print.