It was not a surprise for us that we made lots of mistakes with the new heated bed. Actually, our biggest surprise was that the first print had been successful! Of course, it was only a miracle and we made lots of errors since than.

During the first test print we realized one cable from the PC power supply (see our previous post) was not enough. That cable and the connector was almost as hot as the heated bed itself, which is heated to 60 degree Celsius. So, we had to rewire the printer a little to be able to use two different cable for the two biggest consumers: the hotendThis is where the plastic actually melted. It is part of the extruder which contains the pusher and the barrel as well. and the heated bed.

After this little maintenance, we experimented a little with turning off the heated bad after the first few layers, but it turned out that without the heat the objects didn't stick to the bed enough and the head simply picked them up one by one. However when we left the heater on for the full print a new problem popped up: the cooling was not enough. We haven't found a solution for this problem yet, but if the printed objects are large enough the heat doesn't cause too much trouble. 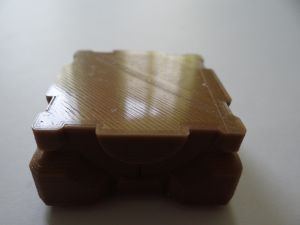 Of course we had some success during this experimenting period. We successfully printed a few new items to sell on Ebay. And as you can see on the picture the new heated bed made the bottom layer so smooth it is literally shining like a mirror. We have had lots of problems with the first layer in the past and it seems the heated bed solves them just as we expected.